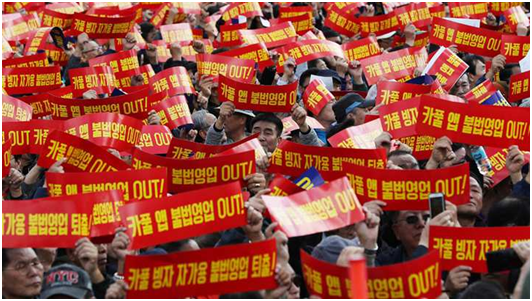 Seoul Taxi Federation issued a notice to its members on the 18th, calling on all drivers to stop operating from 4:00 a.m. to 4:00 a.m. Then all of members gathered at Gwanghwamun Square at 2:00 p.m. on the 18th to attend a rally on the theme of “Oath to Guard the Right to Livelihood of Taxis Drivers”. According to South Korean media forecasts, Seoul, Gyeonggi Province, Incheon and other areas of the capital circle more than 100,000 taxi drivers joined this strike.

One of the Taxi drivers joined rally said in an interview “The current economic downturn, taxi fares have not been rising, in this case KAKAO also plans to launch a carpool service, however the government has no response anymore.” He added as “Our taxi driver is at the bottom of the society now. There is no place for him. It’s too difficult to face this Dilemma .”

Carpool is Kakao’s new carpool service, which matches passengers and drivers when they are in the same direction and destination. KaKao is aiming at this market demand and launching the carpool App. However the taxi drivers are very resistant to such services. Although the “carpool” App has not been officially put into use, the news immediately aroused strong protests from the Korean taxi industry. 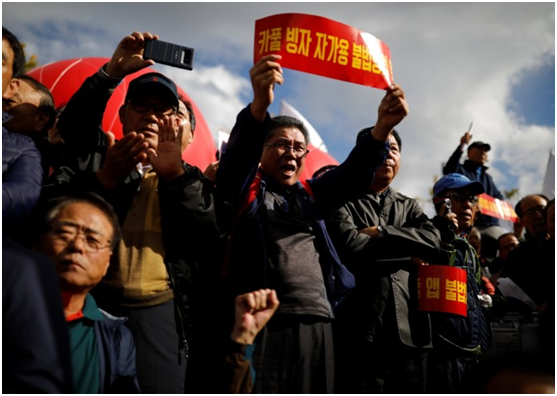 It is understood that Hyundai Motor Co. of South Korea last year invested in buying a share of a carpool service company, the Korean taxi industry launched a “boycott of Hyundai cars” campaign resulting in Hyundai Motor Co. had to sell the shares after six months. Not only that, the company Uber, which owns the world’s largest share of vehicles, entered the Korean market in 2013 and was forced to leave over one and a half years later because of strong opposition and conflict from the Korean taxi industry.