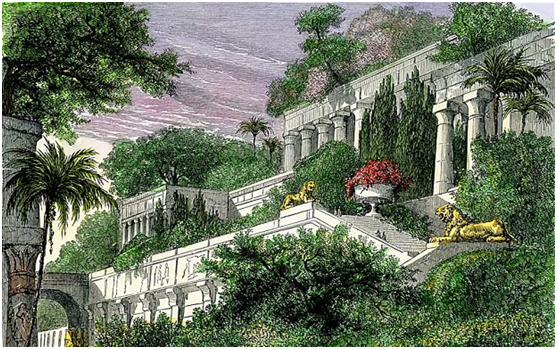 The hanging gardens, also known as hanging gardens of Babylon, is one of the seven wonders of the world. According to the legend, it was built in the 6th century BC by the King Nebuchadnezzar of the Kingdom of Babylon for his homesick Princess Amyitis in the city of Babylon and is now extinct. It is located on the west side of the new city of Babylon near present-day Hillah, Babil province, in Iraq. According to the Greek historian Agyrium, the garden is called the Hanging Garden because it is covered with buildings with arcades and trees and plants on the small terraces at different heights. From afar It seems like hanging in the sky.

The Hanging Garden of Babylon, of course, was never suspended in the air. The name came from the wrong translation of the Greek “kremastos” and the Latin “pensilis” as except meaning of “hanging”, in addition to meaning of “protruding”.

Now scientists have confirmed that the Hanging Gardens of Babylon is actually located in Nineveh, 300 miles north of Babylon. It was built by Sennacherib, king of Assyria, not King Nebuchadnezzar of Babylon.

The total length of the air garden is more than 500 meters, which is built on a high platform by three-dimensional gardening. The rockery is stacked up with stone pillars and stone plates up to the sky. From afar, the garden is just like in the sky. The rockery is divided into three layers as upper, middle and lower. Each layer is supported by big stone pillars, with layers of pavilions. To prevent seepage, each layer is covered with tar-soaked wicker mats, two more layers of bricks on the mat, a layer of lead is poured, and then fertile soil is planted on them, many exotic flowers and plants from other countries are grown around the garden, and irrigation water sources and pipes are provided. There are two kinds of walls, made of mud brick or brick, with towers, including 7.1 meters at the widest part of the outer walls. The main entrance was a north-south parade avenue, and the avenue was paved with stone or brick.

More Information About Seven Wonders Of The World.